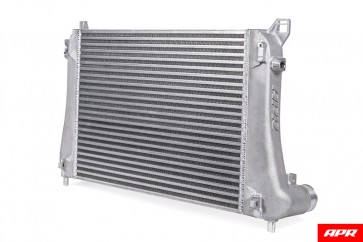 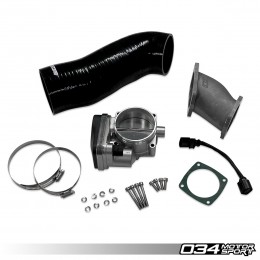 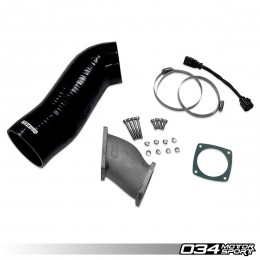 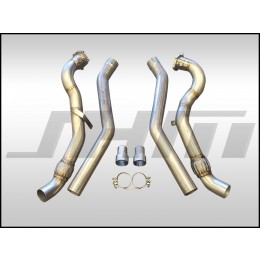 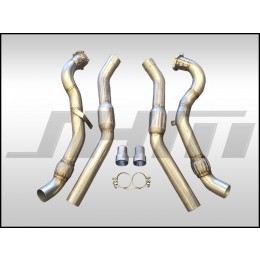 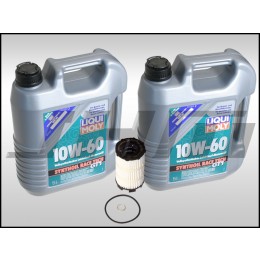 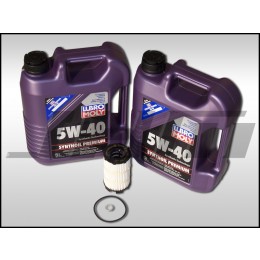 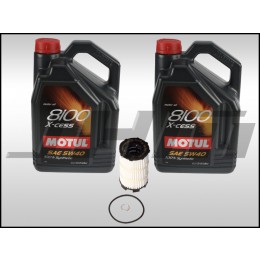 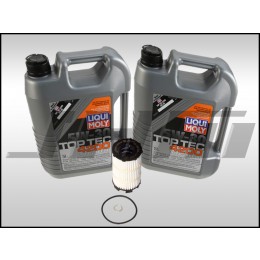 The APR Intercooler System is a OEM-location upgrade that dramatically reduces intake air temperature (IAT), minimizes heat soak, and provides increased performance! The system is a direct bolt-on upgrade that requires no trimming and is recommended at every stage of performance.

APR pioneered the OEM-location direct-replacement intercooler system in 2006. Unfortunately, to the untrained eye, many intercooler designs appear the same. However, effectiveness of the system and overall performance are greatly determined by several key metrics. Alloy selection, end tank design, construction type, fin style, fin density and overall core dimensions must be analyzed and balanced accordingly to deliver class-leading performance. While the OEM’s goal is to create a lightweight, easy to manufacture and inexpensive to produce, cross-platform design capable of supporting factory power levels, APR’s intercooler must be capable of supporting more than double the factory output. Achieving this goal took a multi-step approach focused around intercooler core selection, end tank design and install location.

Cycle through the tabs below to learn more! The APR Intercooler core is a large bar-and-plate design featuring densely packed staggered and louvered fins. This design offers exceptional cooling while balancing pressure loss across the core, and maintaining critical airflow to the components behind the intercooler system. The core size was appropriately matched to the platform, minimizing pressure drop while leaving adequate space for appropriately designed end tanks. To APR’s mechanical engineering experts, the design represented the ultimate in performance, far exceeding the capabilities of the factory intercooler. To the driver, the result is simple: Repeatable performance, even in the most demanding of situations!

APR’s Engineers paid close attention to the balance between core effectiveness and pressure drop through the core, core style and fin density. With fin density too low, pressure drop decreases dramatically, but typically results in a core incapable of effectively cooling. Likewise, with fin density too great, pressure drop increases dramatically, resulting in the turbocharger working harder, and hotter, to produce the same level of airflow. By fine tuning this often unseen balancing act, as illustrated below, APR’s Engineers were able to maximize performance.

To fully utilize the massive core, APR’s mechanical engineers designed cast aluminum end tanks organically shaped for proper airflow distribution across the entire core. By correctly sizing the intercooler core, end tank design was not sacrificed. The one-piece end tanks are CNC machined to provide a slip resistant mounting surface for hoses, precise integrated mounting surfaces, and perfectly flat connecting surfaces used for TIG welding the tanks to the core. Through proper alignment in welding jigs, each unit is assembled to tight tolerances for a precise and accurate fit. APR’s Engineers determined the proper end tank design, for this application, with the help of pressurized CFD flow analysis via the SimuTech Group, and finally through real world testing. During the analysis, the effect of directional vanes were studied to test their ability to aid in airflow distribution. Analysis concluded there was no perceivable benefit on this application as the vanes only added more weight to the system. Real world testing without directional vanes resulted in a +0.5 °C to -0.5 °C temperature spread from the bottom to the top of the core on the outlet side, throughout the various back-to-back tests, further concluding the design maximized cooling effectiveness of the core. Intercooler placement plays a critical role in overall performance. By utilizing the factory mounting location, APR’s engineers were able to design a core featuring a massive frontal surface area and large core volume, which plays a critical advantage over common short and stubby front mount designs. Utilization of the factory location means the core receives a high volume of pressurized airflow spread across the entire unit thanks to the highly engineered factory air dam system. Furthermore, by keeping the intercooler in the OEM-location and balancing core fin density, the factory air-to-water cooling system is not disrupted, which is ever so critical on this platform due to the use of an integrated cylinder head manifold cooling system. The APR intercooler system simply fits, which helps save on hidden labor charges during the time of install. There are no compatibility issues with active cruise control (ACC) systems and the design leaves room for future engine / transmission oil cooling upgrades for track-going customers. The intercooler installs without trimming any air dams, core supports, or more. There’s no drilling, or permanent modifications to the vehicle. Simply follow the included directions and enjoy! Internally APR conducted a multitude of tests while choosing the appropriate intercooler core and end tank design. Thermocouples were placed at the top and bottom of the core to measure cooling effectiveness and cooling distribution across the entire unit. Pressure transducers were placed at the inlet and outlet of the intercooler to determine pressure loss across the various units. With this information, APR’s engineers specified the appropriate intercooler core type, dimensions, cooling fin density and made the necessary design changes to the end tanks to ensure full utilization of the entire core. The tests quickly proved the long sought after OEM “upgraded” cooler (factory Golf R intercooler) showed minimal improvement over the standard GTI unit. However, the APR intercooler saw a dramatic difference that made a positive impact on performance.

The factory GTI and Golf R intercoolers saw a starting IAT of 43 °C and 42 °C which climbed to as high as 71 °C and 66 °C, respectively, by the end of only the first pull. In contrast, the APR intercooler system saw IAT’s drop to 40 °C! The APR system effectively rejected heat soak and by the end of the sixth run saw a final IAT of 49 °C where as both the GTI and Golf R intercoolers struggled to keep up, resulting in a final performance robbing IAT of 84 °C and 82 °C. This translated to a final gain of 21 WHP over the GTI intercooler and 18 WHP over the Golf R Intercooler! The tests quickly proved the factory Golf R intercooler could not effectively reject heat soak on vehicles equipped with APR’s performance software. However, the APR intercooler saw a dramatic difference that made a positive impact on performance.

The factory intercoolers saw a starting IAT of 26 °C which climbed to as high as 46 °C by the end of only the first pull. In contrast, the APR intercooler system saw IAT’s only raise 1 °C! The APR system effectively rejected heat soak and by the end of the sixth run saw a final IAT of 36 °C where as the factory intercoolers struggled to keep up, resulting in a final performance robbing IAT of 54 °C. This translated to a final gain of 14 WHP over the Golf R intercooler!


This product fits the following vehicles:
Reviews
Write Your Own Review
Off-road Use